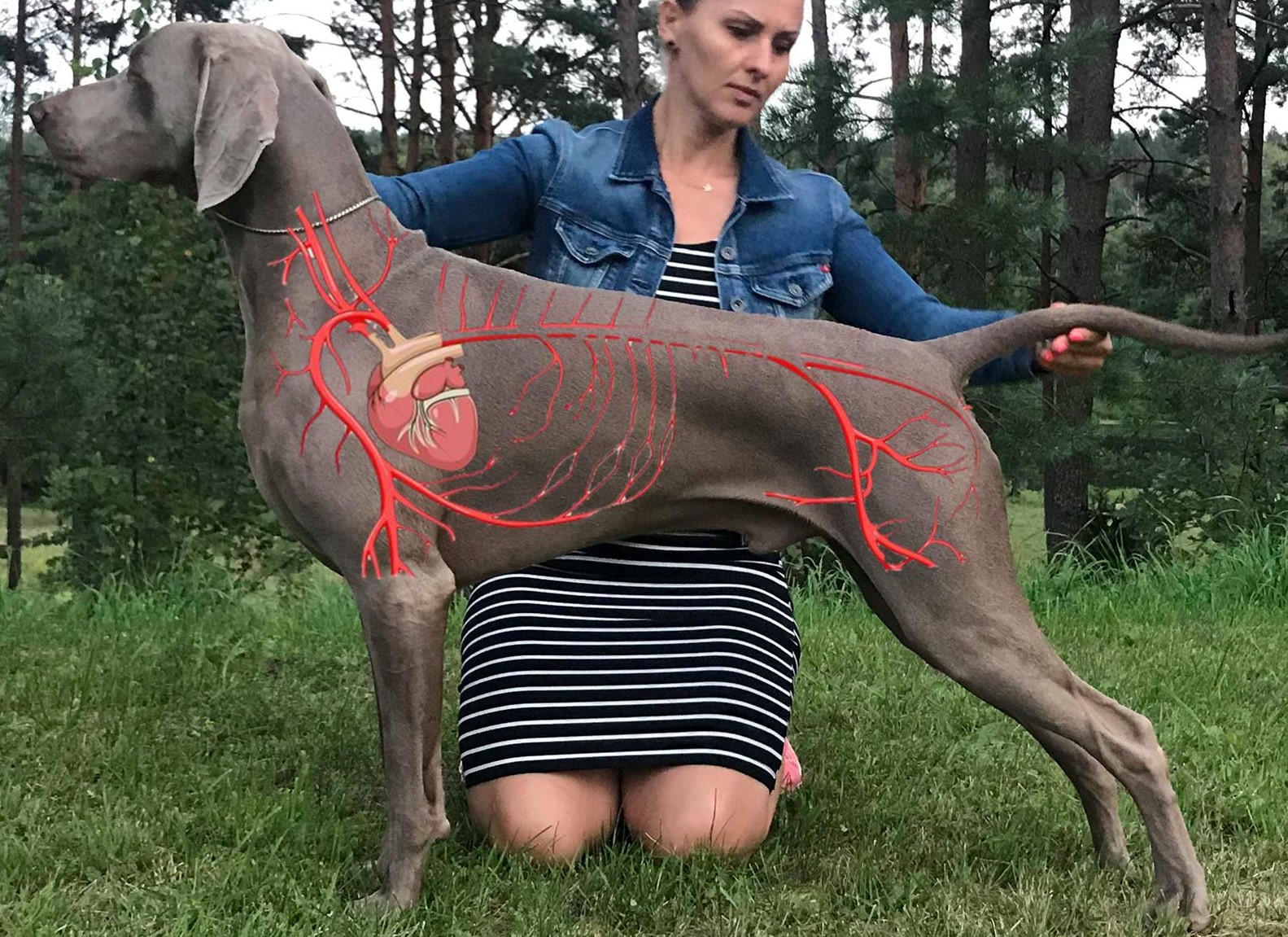 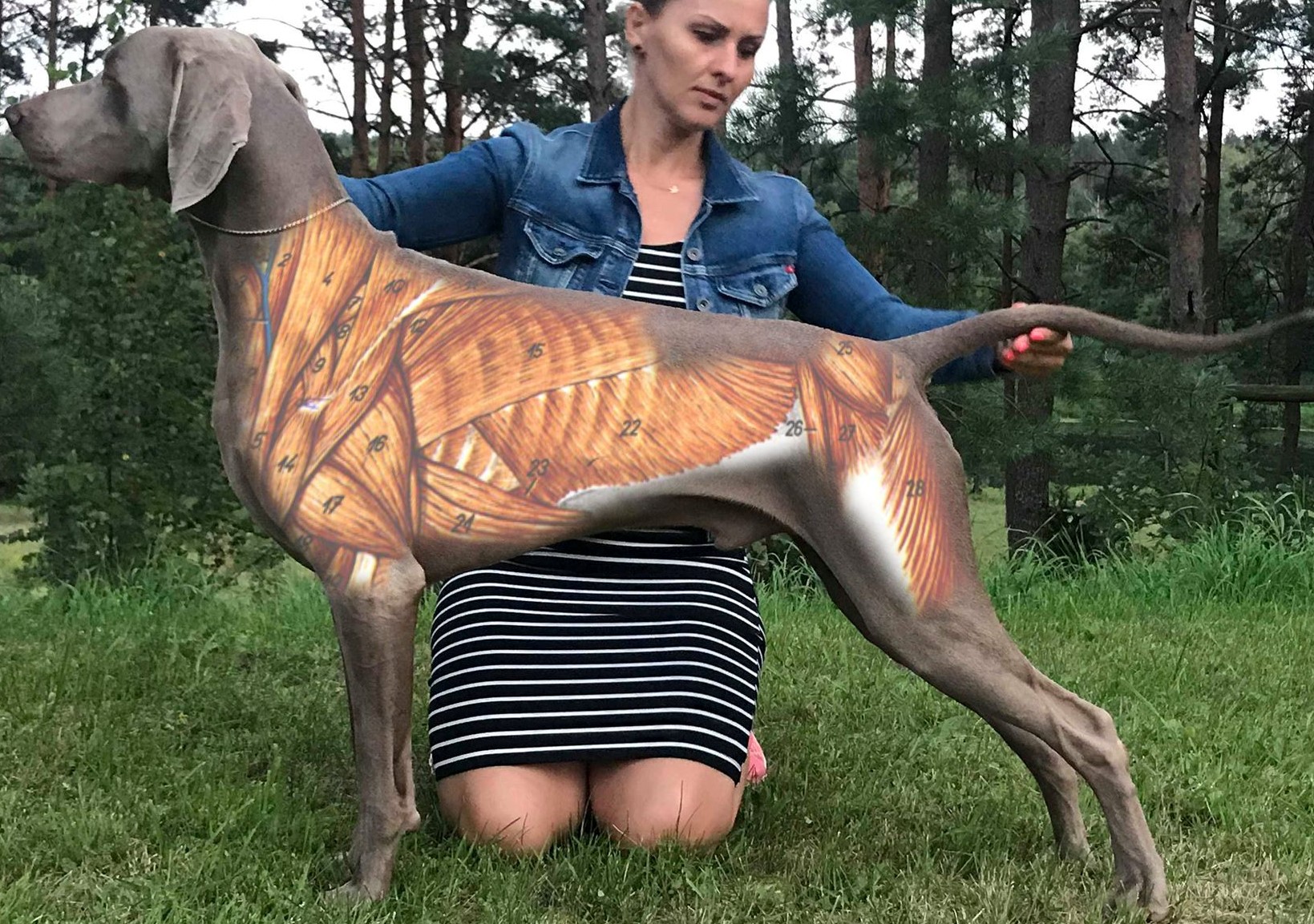 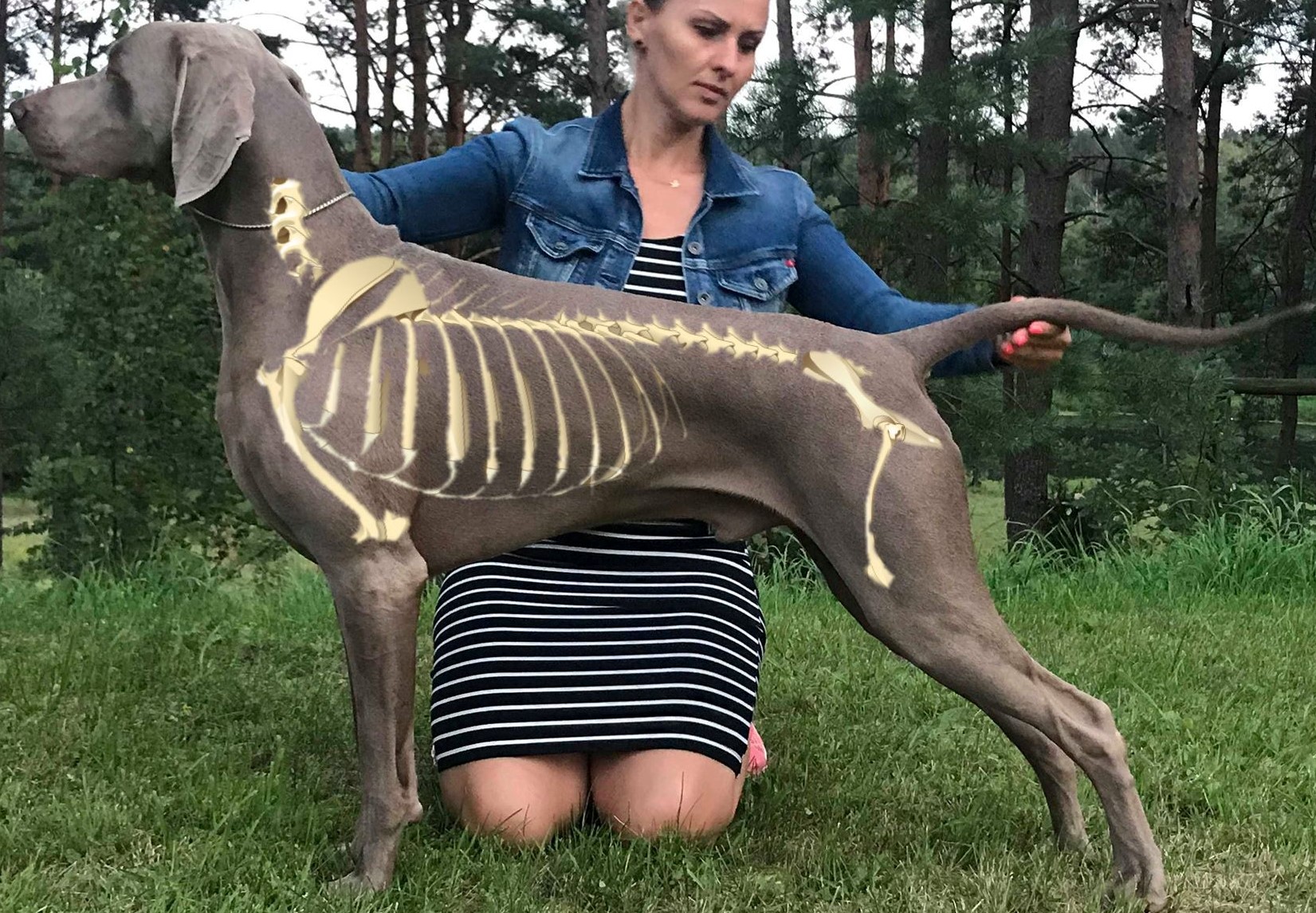 BRIEF HISTORICAL SUMMARY: There are numerous theories regarding the origin of the Weimaraner Pointing Dog.  Only so much is certain : That the Weimaraner, which at that time still contained a great deal of liam hound blood (« Leithund ») was already kept at the Weimar court in the first third of the 19th century.

In the middle of the century, before pure breeding was started, breeding was mainly in the hands of professional hunters and game keepers in central Germany, mostly in the regions round Weimar and in Thuringia.  As the days of the liam hounds passed, the dogs were crossed with the « Hühnerhund » and breeding was continued with this cross.  From about 1890 on, the breed was produced according to a plan and regarded as suitable for registration in a stud book.  Apart from the short-haired Weimaraner, a long-haired variety occurred, if only singly, since the turn of the century.  Since being admitted to the stud book, the Weimaraner has been pure bred, remaining mostly free from crosses with any other breeds, in particular, Pointers.  Therefore the Weimaraner is likely to be the oldest German « pointing » breed, which has been pure bred for about a hundred years.

Length of body to height at withers approximately 12 : 11.

Proportions of the head : From tip of nose to stop slightly longer than from stop to occiput.

BEHAVIOUR / TEMPERAMENT: Versatile, easily trained steady and passionate hunting dog.  Persevering in systematic search, yet not too lively.  Remarkable ability to pick up scent.  Ready to seize game and other prey; he is a good watchdog, without aggressiveness however.  Reliable pointing dog and worker in water.  Remarkable inclination to work after the shot.

Skull : In balance with size of body and facial region.  Broader in dogs than bitches, yet in both, the relationship between width of cranial region to total length of head must be in good proportion.  Median groove on forehead.  Slightly to moderately protruding occipital bone.  Zygomatic arches easily traceable behind the eyes.

Leathers : Lobular, broad and fairly long, just reaching to corner of mouth.  Set on high and narrow, forming a rounded off point at tip.  In alterness, turned slightly forward, folded.

NECK : Noble appearance and carriage.  Upper line arched in profile.  Muscular, nearly round, not too short, clean.  Becoming stronger towards the shoulders and merging harmoniously into the topline and chest.

Topline : From the arched neckline, over the well defined withers the topline merges gradually into the relatively long, firm back.

Back : Firm and muscular, without a dip.  Not running up towards the rear.  A slightly longer back, a breed characteristic, is not a fault.

Chest : Strong but not unduly broad, with sufficient depth to reach almost to elbows and of sufficient length.  Well sprung without being barrel-shaped and with long ribs.  Forechest well developed.

Underline and Belly : Rising slightly, but belly not tucked up.

TAIL : Set on slightly lower than with other similar breeds.  Tail strong and well coated.  Carried hanging down in repose.  When alert or working, carried level or higher.

General  : High on leg, sinewy, straight and parallel, but not standing wide.

Elbows : Free and lying parallel to median plane of body.  Turned neither in nor out.

General : High on leg, sinewy i.e. well muscled.  Standing parallel, turning neither in nor out.

GAIT / MOVEMENT : Movement in all gaits is ground covering and smooth.  Hind and front legs set parallel to each other.  Gallop long and flat.  Back remains level when trotting.  Pacing is undesirable.

SKIN : Strong.  Well but not too tight fitting.

Short-haired : Short (but longer and thicker than with most comparable breeds), strong, very dense, smooth lying topcoat.  Without or with only very sparse undercoat.

Long-haired : Soft, long topcoat with or without undercoat.  Smooth or slightly wavy.  Long flowing hair at ear set on.  Velvety hair is permissible on tips of leathers.  Length of coat on flanks 3 - 5 cm.  On lower side of neck, forechest and belly, generally somewhat longer.

COLOUR : Silver, roe or mouse grey, as well as shades of these colours.  Head and leathers generally slightly paler.  Only small white markings on chest and toes permitted.  Sometimes a more or less defined trace occurs along the back.  Dog with definite reddish-yellow marking (« Brand ») may only be given the classification « good ».  Brown marking is a serious fault.

Height at the withers :

FAULTS : Any departure from the foregoing points should be considered a fault and the seriousness with which the fault should be regarded should be in exact proportion to its degree and its effect upon the health and welfare of the dog.

Gross deviations from size and proportions.

Eyes : slight faults, above all slight and unilateral faults in eyelids.

Back : Definite sway or roach back.  Rump higher than withers.

Gross anomalies in stance i.e. lack of angulation, out at elbows, splay feet.

Mixture of coat varieties defined in the standard.

Lack of feathering on belly or leathers (leather ears).  Widely spread woolly coat in the short-haired Weimaraner or curly or sparse feathering in the long-haired variety.

Departure from shades of gray, such as yellow or brownish.  Tan marking (« Brand »).

Strong departure from correct height or weight (e.g. more than 2 cm from measurements given in the standard).

Completely untypical, above all too heavy or too light in build.

Back : Severe sway or roach back.  Definitely overbuilt at croup.

White markings other than on chest and feet.

Other malformation.  Illnesses which must be considered hereditary, i.e. epilepsy.

The compilers can, naturally, not list all faults which occur, the above are to be regarded as examples.

Any dog clearly showing physical or behavioural abnormalities shall be disqualified.